Popped out for a quick bit of birding this morning so decided to go to Upper Bittell Reservoir where 2 juvenile Curlew Sandpiper had been seen this morning.
After a quick check of Lower Bittell where a Wigeon and a weak attempt at stringing a Ferruginous Duck were the highlights.
Arriving at the dam at Upper it shocked me how low the level of the reservoir was. I've never seen it this low and thinking about it now I should have taken a photo of it!
Anyway a small flock of waders was on the far shore at a range of 13 miles and the 2 Curlew Sandpipers picked out. 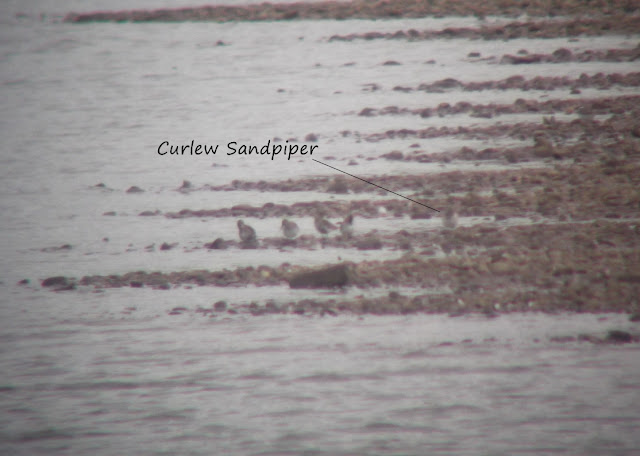 Honest it is a Curlew Sand!


Anyway after checking the gulls and the rest of the banks where nothing much else was, we headed home.
So why did I go and see 2 Curlew Sandpiper at 1,500ft range? 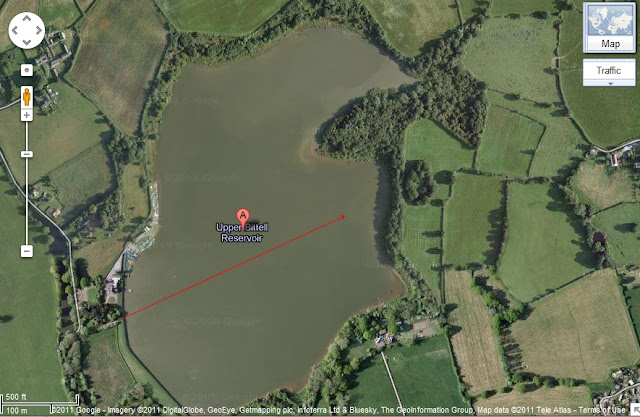 Who knows, answers on a postcard!
Posted by Tim Jones at 8:10 PM 2 comments:

Today involved getting up early and heading to Shenstone to look for the juv Black Redstart thats been kicking around there for a while.


Arriving fairly early 06:45 we waited about 30 mins until we managed to see the bird. Initially picked up at some distance it eventually came a lot closer and showed really well. Right nice bird and I've only seen 1 before! Shocking.

Apparently its a juv as it was fluffy and spotty when it first turned up, I couldn't see why it was one today! Pale wing panel was a feature I wasn't expecting but being a complete novice with Black Reds a quick google shows that female types can show this.

Photos of the actual bird here http://shenstonebirder.blogspot.com/ seen as I couldn't be bothered.

Having not being able to get down to the lakes since Monday my first chance was this evening so I headed down  to see what was about.


Pulling up by the western flashes a quick look up shows a largish wader but my bins were still in my bag! Quick panic to get them out and get on the bird (whilst thinking poss Whimbrel) get on the bird and its a cracking juv male Ruff!


This is my 18th sp of wader in under a year of watching my University lakes! (missed Knot and Black-tailed Godwit)


By the time I'd set up the scope, had a look at the bird and then realised I'd left my camera at home! The bird then flew towards the Wood Sand pool. Quick move and the bird was showing well feeding away. Great big stunning thing.


Walking along the main lake a juv Little Grebe was on part of the main lake, only my second record on site.
5 Tufted Duck plenty of ducks, geese and gulls going over and 3 Common Sands on the main lake.


Grey Phal will have to wait till tomorrow

Right time to sort this blog out!
Went to Cornwall for bank holiday weekend, drove down Thursday 25th night and did various seawatches between Pendeen and Porthgwarra up until Tuesday 30th August. Birds seen from seawatching included;
Great Shearwater- 7 (lifer)
Sooty Shearwater- 245+
Balearic Shearwater -47
Manx Shearwater-upto 10,000 in one morning at Pendeen
Roseate Tern-1 (ad)
Storm Petrel- 14+
Sabine’s Gull-1 (1s)
Med Gull-5 (juvs)
Pomarine Skua-4
Bonxie- 18+
Arctic Skua-27+
Chough- 2
Whimbrel-50+
Sanderling-1
Overall very nice seawatching highlights personally being Great Shearwaters, a stunning intermediate morph Pom with spoons, large numbers of Sooty Shearwaters, self finding an ad Roseate Tern and Chough flying past about 15ft away.
Sunfish-2
Basking Shark-2
Never seen Basking Shark before so was great to see one really close at Pendeen.
Quick early afternoon visits to Drift Resv, Marazion and Hayle Estuary produced
Little Stint-juv
Curlew Sandpiper-juv
Good selection of waders but we missed finding the Baird’s Sand by a day!
Quick detour one afternoon to the Lizard to see the Black Kite, great views of it flying low over a field and even catching a vole!
Then on way home stopped off in South Devon to see some lovely Cirl Buntings by third lifer of the trip and then stopping off in Somerset to try and see the Spotted Crake and Great White Egret at Shapwick Heath NNR. Spotted Crake didn’t show but Great White Egret did which was my 4th lifer of the trip.
Since getting back from Cornwall birding has mainly involved going down Hes East pretty much every day to see what I can find down there. So far Little Stint, Garganey, Whinchat and 2 Raven are all new for the site along with Knot which I missed out on.
Went for a seawatch one afternoon at Filey after a Fea’s had gone past Flamborough, but quiet wasn’t the word! Several Arctic Skua, Purple Sandpiper, Whimbrel and a juv Med Gull were the only real highlights.
Had an afternoon twitch up to Greatham Creek where the ad Sharp-tailed Sanpiper showed well! Then further on up the coast to Whitburn where we dipped American Golden Plover and Bonaparte’s Gull, however nearly 1000 Golden Plover on seaweed covered rocks were nice and an ad Med Gull that Ollie thought could have been a hybrid but I think it was just a runty winter Med.
Life List-288
Year List-230
Campus List-115
Semi-palmated Sandpiper is slowly getting closer and hopefully it will be relocated at Blacktoft soon!
Posted by Tim Jones at 2:59 PM No comments:


Well maybe tomorrow, have seen some good birds recently. Including 2 local megas on the patch in last 2 days, intrigued? Tune in tomorrow (unless I just go birding instead)
Posted by Tim Jones at 11:15 PM No comments: